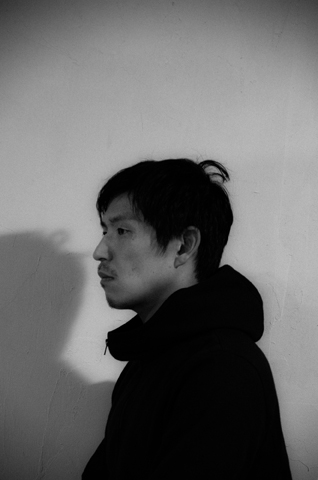 Initially made in an artist edition of 69 at the Photobook as an Object Workshop at Reminders Photography Stronghold in 2015, Hajime Kimura's Snowflakes Dog Man is now available as a trade edition. It respects not only the content, but also the hand made elements of the artist book version.

Learn more about Hajime and his project by reading our interview below, and pre-order a signed very early-bird copy of the BOX and BOOKS or the SPECIAL EDITION now!

The book will be presented in December 2019 in Tokyo, the European book launch date is yet to be defined, we're aiming for Paris Photo time.

Who is Hajime Kimura? Where do you come from, also as a photographer, or better, as an artist?

I’m a photographer based in Japan, I was raised in a town in Chiba Prefecture, about 30km north of Tokyo. My town is in a suburban area, I was growing up there in the 70’s, during the high economic growth era. While studying architecture in university, I gradually slid to photography.

Looking back on that time, I recognize that I was a lazy student, I didn’t attend the class so much, instead I traveled alone with my camera. When I was a senior in university, I was in the library for the research for the thesis. I paged some old books depicting the history of the villages in the deep countryside in northern Japan.

They seemed to be build around 100 years ago, they looked very ancient anyway. But I found they were just 15 to 20 years old. I clearly remember I got confused. Since then they had been stuck deep in my mind, and I’d like to go there to see them someday, if they’re still around. Over time this ended up to be the first project. So I would say it was around that time I was seriously getting into photography.

I don’t care so much who I am. But if asked, I would say my profession might be a photographer, because photography is my formula and I always think of a project based on photographs. 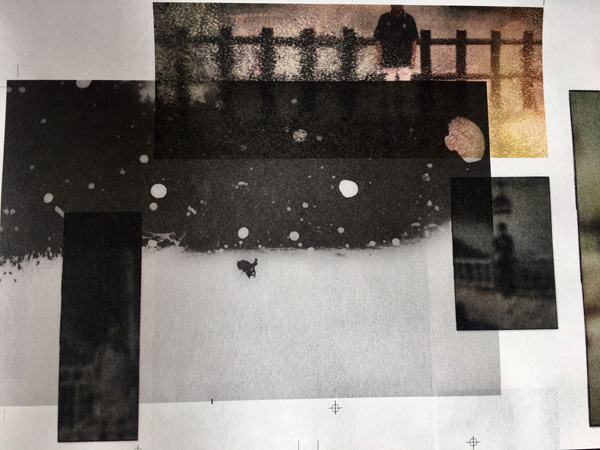 Snowflakes Dog Man, what is at the origin of the project?

My father passed away in 2011. One day I got a call from my sister that he had cancer. Through a long time I had not been with him, he looked smaller at the last stages of his life. Somehow I took his photographs as a record, because I didn’t have any photographs of him. A few years after he was gone, I didn’t even expect that I'd made a project about this, simply because it was too heavy, and I had to clean up his belongings, which occupied his room. Moreover, I had not gotten along with him, so I wanted to forget.

As time passed though, I was getting settled. One day, when I took a walk with my father's dog, I realised there was someone who didn’t know yet that my father passed away.

All of a sudden, I was talked to by someone who had known my father and his dog while they took a walk. I didn’t know their promenade. But the dog already knew and led me the way, they'd had their routine over a long period. After I realised this, I felt a strangeness, as if he was still living, knowing that he was not living. At that point I was interested in knowing more about him, his relationship with his dog and the places where he had been through. After all, I tried to take photographs little by little, especially of the memories of him, to see whether I could interact again with a man who was already gone. That's how Snowflakes Dog Man it became a project.

How did it become the book, the object, it is now?

First of all, the book has three parts. The first one, the small book, depicts the record of when my father was alive; the second one, the bigger book, depicts the places I had visited after he was gone. And then as the third one, which is the thinner bound booklet inserted into the bigger book, is modified with what I found in his room when I cleaned up his belongings after he passed away.

It was just a family album, from when I was born till my early 20s’. For me, this booklet was one of the big reasons that I would like to make a book for this project. Although I didn’t mention in the previous answer, when paging the album, some moments didn't come to me. Strangely I couldn’t remember the situations in the photographs at all, despite them being taken by someone when I was in the early 20's.

In some photographs I was smiling, and in some I was not. There was a contradiction deep in my mind, I wanted to know the reasons, but at the same time I didn’t want to know the reasons. Both happened one after the other. I thought that the album could be the representation for the memory to connect both books, and including such an ambiguous memory, this could be the whole answer for what the family was to me.

In 2016 I took a bookmaking workshop in Tokyo by Dutch book designers Teun van der Heijden and Sandra van der Doelen, and Yumi Goto as a representative of Reminders Photography Stronghold. Through the intense days of work, the basic idea that I mentioned (three parts and two books in one box) finally came.

I appreciate all three of the team, and also the other participants who helped me. After this I made 69 copies as the handmade artist edition.

In short, at the time, I was carrying the handmade book showing it to a publisher that might be interested and I was hoping to publish a trade edition. In the end, however, the answer was no. The reason was obvious: the cost was simply not worth it. Therefore, until we now worked with CEIBA, I was keenly aware that it was very difficult to publish a handmade book as it was. My thanks go to Eva, the publisher's representative; Grafiche Dell'Artiere, who helped me with the printing; and Yumi Goto, who introduced me to CEIBA at the time.

There are still Snowflakes in Japan, Man has ended his journey on earth, but what about Dog, what happened to him?

In 2016 I moved to Germany for a few years. At the same time I left the dog at my sister’s home, in the country side in western Japan. I think the dog turns 10 this year. 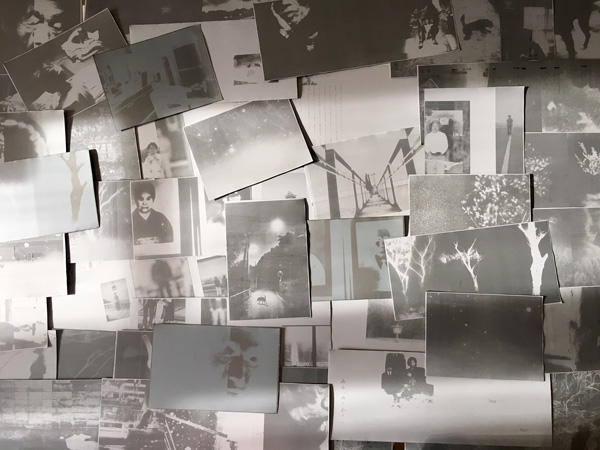 You have been making books for some years now, has there been a change, an evolution, in book making? And since you’ve lived in Europe for some time, is there a Japanese way, or a Western way to make books?

The first time I was published was in 2011 by a publisher in Tokyo. KODAMA's book format was more classic, exploring simple sequences of the photographs. The following year, in 2012, I joined a bookmaking workshop at Reminders Photography Stronghold, hosted by Bookdummy Press, based in NY. I clearly remember that the workshop was more experimental, intended to try improvised ideas. I don’t know how I should put it, but the workshop was less matured and established at that time, not like now. But on the other hand, I was so excited to see the process of how the ideas were starting to reflect in the physical format.

That process was a very important milestone and still strongly influenced me when I think of bookmaking. Since then the bookmaking process has basically been like training to make my brain more flexible, rather than finishing the project.

As mentioned in the question, I think I have been influenced by many great artworks of European countries, not only photographs. And through these experiences, I might have some options for the way of thinking, those ideas could reflect for the future when I do the project and also for the bookmaking. One thing that I would say is that there is not only one way to do it, because I am a Japanese who has grown up in Japan for a long time. So ideally the conclusion could be interacted getting along with many ways to come out with something greater.

What are you working on currently?

Since 2016 I have been working on a project located mainly in Serbia. It’s about the research for my memory, in which a man has been stuck to my brain for a long time, since I was child, and I tried to find the reason why. I still remember some fragments when I watched two football games on TV in my home. In those memories, I remember there was the same football team in both games. One was Dinamo Zagreb vs Redstar Belgrade, which was played in Zagreb in May 1990, the other was Redstar Belgrade vs Colo-Colo from Chile, which was played in Tokyo in December 1991. I have no idea why I could remember them, however some moments still clearly come to me.

In the first one in Zagreb, the football game was not what we usually would expect, it was just a riot and no longer a football game. In the second one in Tokyo, I somehow can’t forget a man who was in the game, but didn’t seem to be a player or a supporter. This is one of the big reasons why I started this project.

In 1993, the J-League, “Japan Professional Football League", was founded. A few years later, many Yugoslavian players had come and joined to the J-League, one of the famous players was Dragan Stoikovich, but I never even thought about why they came to Japan in the peak of their careers. In the World Cup 1998, for the first time the Japan National team joined, and a country bombed by the NATO in 1999 was in the news. I remembered I saw the name Yugoslavia again. Then I started to understand that there was a country, where war and sport were happening at once.

In 2016, I decided to meet the man who I had seen in TV. It was just out of curiosity, but I thought I could fill in the blank time between my childhood and the present. In other words, I could touch the small history of former Yugoslavia through that man. 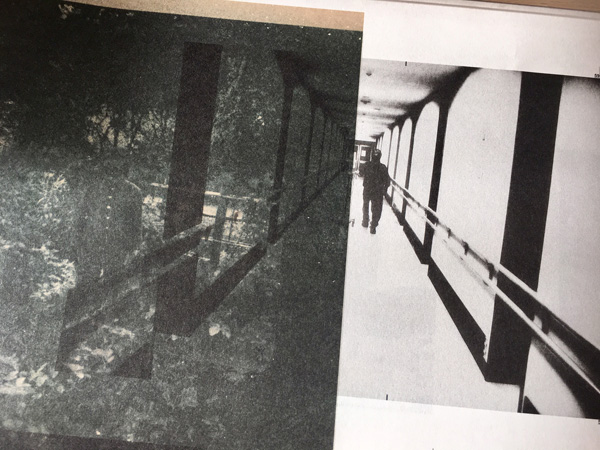 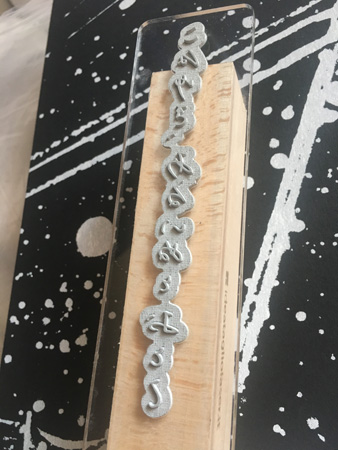